The stack vocabulary contains all the symbols that can appear on the stack, and is not necessarily distinct from the terminal vocabulary (we can have T ∩ P ≠ ∅).

A state-to-stack transition is similar to that of a state machine, except that it additionally specifies the handling of the stack. A transition of M is of the form
(state, symbol_lu, top_stack) → (new_state, action_on_stack) such as:

In other words, a word is accepted by the automaton if there is a series of transitions from the initial state and empty stack, leading to the entire reading of the word and to the empty stack again. Note that some battery-powered PLCs can accept on final states without an empty battery. In addition, any automaton recognizing by final state has an equivalent automaton recognizing by empty battery.

A battery-powered automaton is said to be deterministic if any given situation or configuration corresponds to more than one transition.

Here is an example of a non-deterministic stacked automaton. Let the push-down automaton recognize the language of words formed on {a, b} and containing the same number of a and b: A = (T, P, Q, M, q) such that: T = {a, b}, P = {a, b}, Q = {q} and the following transition matrix M

The operation of this automaton on the word w = aabbabba is: 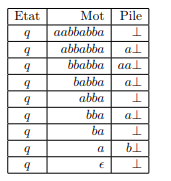 As for finite automata, pushdown automata can be given a representation by graph. Arcs have the following information:

For example the arc a, A; ε will read the symbol a provided you can pop an A symbol at the top of the stack. Note that ε or λ represents "doing nothing".