A simplified description of the immune system or a algorithm Immune is a system of organs intended to protect the host organism against threats made to it by pathogens and toxic substances. Pathogens encompass a range of microorganisms such as bacteria, viruses, parasites and pollen. The traditional perspective regarding the role of the immune system is divided into two main tasks: detection and elimination of pathogens. This behavior is generally referred to as the differentiation of self (molecules and cells that belong to host organisms) from potentially harmful non-self. More recent perspectives on the role of the system include a maintenance system and a cognitive system.

The architecture of the immune system is such that a series of defensive layers protect the host. Once a pathogen enters the host, it must fight the innate and acquired immune system. These interrelated immunological subsystems are made up of many types of cells and molecules produced by specialized organs and processes to solve the problem of oneself at the lowest level using chemical bonding, where the surfaces of cells and molecules interact with the surfaces of the pathogen.

The adaptive immune system, also known as the acquired immune system, is so named because it is responsible for specializing a defense for the host organism based on the specific pathogen to which it is exposed. Unlike the innate immune system, the acquired immune system is only present in vertebrates (animals with a backbone). The system keeps a memory of the exposures it has encountered. This memory is recalled during a reinfection presenting a learned identification of the pathogen. This learning process can be divided into two types of response. The first or primary response occurs when the system encounters a new pathogen. The system is slow to respond, which can take several weeks to clear the infection.

Upon encountering the same pathogen again, the system exhibits a secondary response, applying what has been learned in the primary response and rapidly clearing the infection. The memory that the system acquires in the primary response is usually long lasting, providing pathogenic immunity for the lifetime of the host, two common examples of which are chickenpox and measles. White blood cells called lymphocytes (or leukocytes) are the most important cell in the acquired immune system. Lymphocytes participate in both the identification and elimination of pathogens and circulate in the body of the host organism in the blood and lymph (the fluid that permeates the tissues). 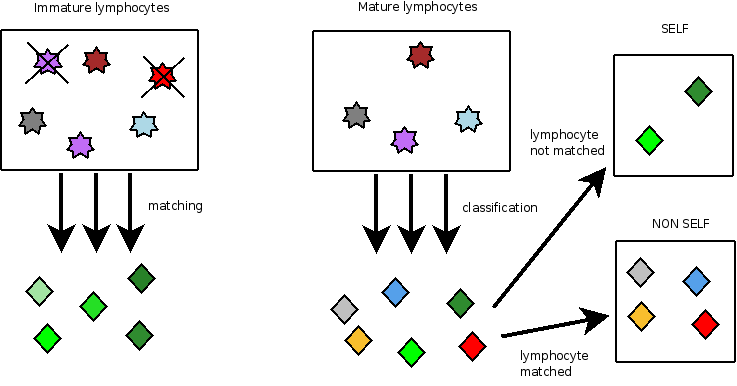