By introducing more or less restrictive criteria on the form of the grammar rules, we obtain hierarchical grammar classes (types of grammars), ordered by inclusion. The classification of grammars, defined in 1957 by Noam Chomsky, distinguishes four classes.

Type 0: no restriction on the rules.

Type 1: context sensitive or contextual grammars. The rules of R are of the form:

Type 2: context-free grammars. The rules of R are of the form:

We consider the language L of words on {0, 1} which represent even unsigned base 2 integers (the words of this language all end with 0 and do not start with 0, except for the zero integer). Formally define L and construct a regular grammar describing L.

Preferably, we always take the regular right-hand grammar for the study of future states in automata.

By denoting with Xp, Xq, Xr the languages accepted from the states P, Q and R respectively, the system of equations for these languages is: 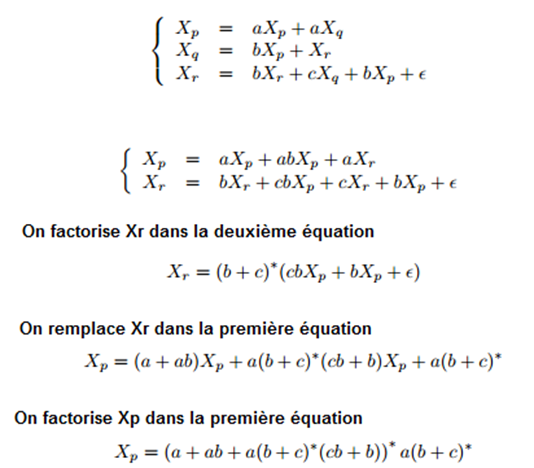