There are 5 cities. The cost of building a road directly between i and j is the entry ai, j in the matrix below. An indefinite entry indicates that the road cannot be built. Determine the least cost of making all the cities reachable from each other. 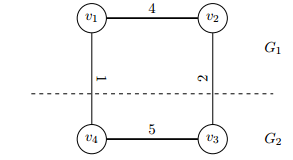 Show that if G is a weighted graph and e is an edge whose weight is smaller than that of any other edge, then e must belong to every minimum weight spanning tree for G.

Show that if all the weights of the weighted graph G are distinct, then there is a unique minimum weight spanning tree for G.

We claim there is no other minimum weight spanning trees for G. Suppose (and we will show this leads to a contradiction) that there are other minimum weight spanning trees, and choose one, T '. Then suppose that e is the first edge of T that is not in T '. In other words, suppose that the edges of T, in the order they were added to form T, are e1, e2 ,…, Ek ,… En − 1 and that e = ek and for all i <k, ei ∈T '.

Let C be the cycle in T '+ e that contains e. let f be an edge of C that is not in T '. We note that by the nature of Kruskal's algorithm, the weight of f must be greater than the weight of e. This is because at the time we placed e into T, f was also available and would not have produced a cycle (since all the edges of T up to that point are in T 'as well). So if w (f) <w(e), we would have used f at that juncture. So now set T*=T’+e−f is a spanning tree of weight less than T’, a contradiction.

Consider a “reversed” Kruskal's algorithm for computing a MST. Initialize T to be the set of all edges in the graph. Now, consider edges from largest to smallest cost. For each edge, delete it from T if that edge belongs to a cycle in T. Assuming all the edge costs are distinct, does this new algorithm correctly compute a MST?

Yes, it does. At stage k (starting ak = 1), the algorithm considers the k-th largest cost edge. If that edge belongs to a cycle in the remaining graph T, then all edges in that cycle (and indeed in T) must have smaller cost than the edge being considered. Thus, the edge cannot belong to the MST (by the previous question).

Curious and curious, discover our other site on the social sciences (History, Religion, Mythology, Anthropology). Come and rediscover our past on <Mythes et Légendes>